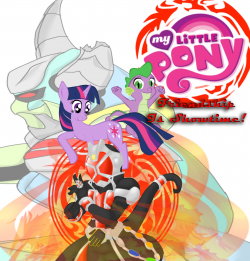 "Magic – a mysterious force in this world, capable of bending reality. At the beginning, magic was studied as progressively as a science, with as many kinds of magic as there are stars in the night’s sky. But as civilizations advanced, many forms of magic were forgotten.

As time passed, only a few known forms of magic are common place in Equestria..."

Long ago, a pair of magicians wielded a type of magic lost to history. Their rivalry lead to both great good, and the creation of a great evil...

So begins the Lost Tales of the Phantoms, a book Twilight Sparkle happened upon one day at a traveling bookstore. The unicorn is left fascinated by the idea of a long lost type of magic from an age that history has long since forgotten and filled with a desire to learn more. However, the legend suddenly become all too real when one of the Phantoms sets its sights on her and Spike. But before the monster can succeed, a young dragon name Haru saves them using the same ancient magic of which the legend spoke...

crossover fanfic between Kamen Rider Wizard and My Little Pony: Friendship Is Magic by MangaKamen, set in an Alternate Universe from both series diverging shortly after "The Ticket Master".

Another fic revolving around Kamen Rider Double has been written set in the same universe.

Tropes appearing in this story: