Literature / RWBY: After the Fall

Spoilers for all RWBY works preceding this one will be left unmarked. 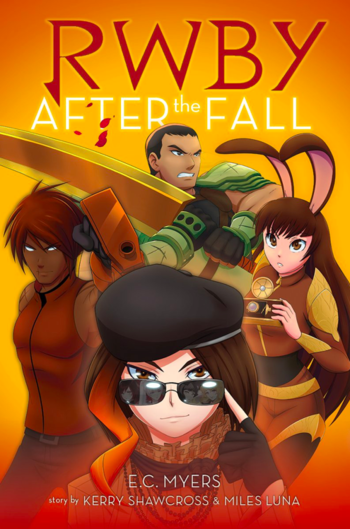 A dose of CFVY
Advertisement:

RWBY: After the Fall is a novel written by E.C. Myers, with help from Kerry Shawcross and Miles Luna. It was released June 25, 2019 by Scholastic, Inc.

It focuses on Team CFVY (Coco, Fox, Velvet and Yatsuhashi) as they continue to work as Hunstmen-in-training in the Kingdom of Vacuo, following the events of RWBY Volume 3. They are called to a settlement where the people seem to be suffering from strange and unnatural spikes in emotions, which in turn are causing a spike in Grimm attraction. As CFVY try to figure out what's going on and protect the people, their minds continually turn back to their time at Beacon Academy.

After The Fall provides examples of: