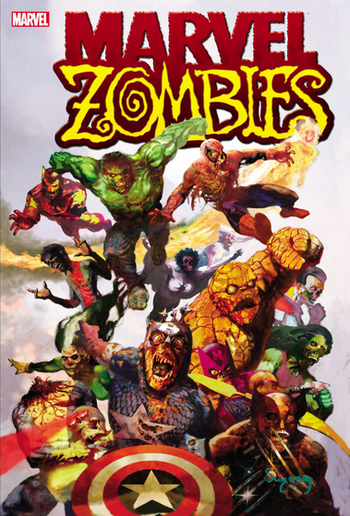 It's all fun and games... 'til they eat your brains.
It started with a flash in the sky, and a ripple through the clouds. The hunger is what brought it here; and feed it did, until the Marvel Heroes were no more. They were replaced by soulless monsters, driven only by an insatiable craving for human flesh.
This is no world of Marvel Heroes.
This is the world of... Marvel Zombies.
— Opening blurb, Marvel Zombies
Advertisement:

Marvel Zombies in a nutshell — an alien virus carried into an Elseworlds version of the Marvel Comics universe by a zombified Sentry has transformed the Marvel superheroes and supervillains into cannibalistic zombies who, by the time we're introduced to them, have already consumed every living thing on their own Earth (in twenty four hours, no less) and so are desperately searching for a new source of food so as to quell the vicious, all-consuming hunger that they feel.

The popular franchise stems from a 2005 arc of Ultimate Fantastic Four, "Crossover", which teased at a meeting between the Ultimate Marvel universe and the mainstream one, through a meeting of the two different versions of the Fantastic Four, only for Ultimate Reed to discover that he'd been tricked by the zombie Reed Richards trying to find a portal to another dimension and, thus, a new food source for the zombies. The arc was popular, resulting in six mini-series and several guest appearances following the exploits of the zombies at time of writing (April 2010). Plus, the zombified Fantastic Four end up becoming the Ultimate version of the Frightful Four.

As it is in another universe and has its own premise, the Marvel Zombies are not considered part of the Ultimate Marvel line, regardless of their editorial origin.

The Marvel Zombies franchise following this Arc consists of:

The zombies and the Hunger Gospel have appeared in multiple other books as well, as cameos or antagonists. Most notably, the 13-issue series Deadpool: Merc with a Mouth is the story of a time-traveling Deadpool meeting and killing several of the B-list zombies who survived the massacre in the original book. An arc in Reginald Hudlin's run on Black Panther also featured the Zombies.

The term "Marvel Zombies", by the way, stems from an old nickname for devotees of Marvel Comics.

Elements of this comic franchise are incorporated into the fifth episode of the Marvel Cinematic Universe animated anthology series What If...? (2021). An animated adaption is set to air on Disney+ which will continue the story of the What If...? episode. It will be notable as being the first TV-MA program

created expressly for the streaming service (which had previous forbade the inclusion of movies and shows with adult content ratings).