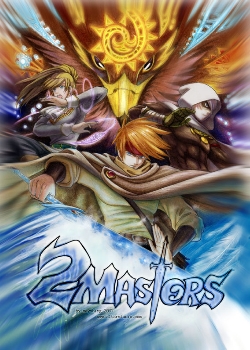 "There are 2Masters in this world.
Master of Heaven, Yehveh; Master of Earth, Mamon.
Both have powers and wealth to shake Heaven and Earth,
and they fight one another for the right to rule over the world.
The people under the 2Masters have to choose one of them to follow..
Those who follow the Masters will earn supernatural powers and wealth to acomplish the Masters goals.
Master Yehveh gives you love and freedom; Master Mamon gives you power and wealth.
Which one... will your heart choose?"
Advertisement:

2Masters is a fantasy warfare series, in a world ruled by the two supreme Masters: Yehveh, Master of Heaven, who represents the spirit of freedom and love, and Mamon, Master of Earth, who is the master of wealth and power.

The Two Masters fight one another and provide completely different philosophies for the living, and humans who follow them are granted powers. This creates a never ending world war.

Published by Mayshing on Smack Jeeves and Tapastic, you can start reading here