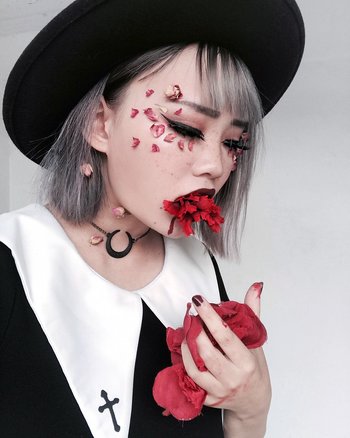 Hanahaki Disease is a fictional disease where someone begins coughing up flower petals because they have unrequited feelings for someone. The flowers can grow in the stomach, lungs, or heart, though it is traditionally in the lungs. Hanahaki Disease is a painful, slow disease that often develops over months, if not years, and begins with coughing up a few petals, and grows in intensity and pain until the victim is coughing up entire flowers, at which point the disease has reached its final stages. If not treated, the disease is fatal. It's primarily an online phenomenon that appears in Fan Works, but it has appeared in original works as well.

Hanahaki Disease originates from Japanese works. The word hanahaki is a fusion of the Japanese words hana ("flower") and haku ("throw up"). The first usage of the trope is unclear, but it was popularized in Japanese Yaoi Genre fandoms before spreading to Korean fandoms and then other international fandoms.

This trope is popular because it has a lot of melodramatic angst-potential, while also being pretty. Death by Hanahaki Disease is tragic but beautiful. The victim is killed from within by something as beautiful as flowers. Haunted by their unrequited love, the person usually tries to cover up their illness. They'll leave behind trails of bloody flowers, which are both horrific and aesthetically pleasing. Flower Motifs are often used, which adds to the symbolism. The flowers are frequently associated with their unrequited love interest: it could be their favorite flower, their favorite color, a flower they're named after, or something along those lines. (So, for example, if Bob is in love with Sakura, he might cough up cherry blossoms.)

Despite how deadly Hanahaki Disease is, it can be instantly cured if it turns out the other person likes the dying person back. It can also be cured by surgery, but this cure often means that the person will lose their feelings for the person they love (a double-edged sword which amps up the drama). Alternatively, the person being operated on will lose all memory of the person. If, for some reason, it can't be cured, it sometimes can be managed with medication (though this is not seen too often), but it never fully goes away.

The trope carries some Unfortunate Implications, as the person being pined for is either forced to return the victim's feelings (something that cannot truly be forced from someone and that no one should feel obligated to do under any circumstances) or be responsible for their death. Alternate versions of the trope have been proposed to avoid these implications, either by making the disease an inconvenience rather than life-threatening or by shifting the disease's trigger to the victim not confessing their feelings without regard to whether the other person returns their feelings or not.

Sub-trope to Incurable Cough of Death, Hopeless Suitor, Flowers of Romance, and All Love Is Unrequited. Related to Body Horror and Victorian Novel Disease. If the LGBT character coughs up relevant flowers, see Queer Flowers.