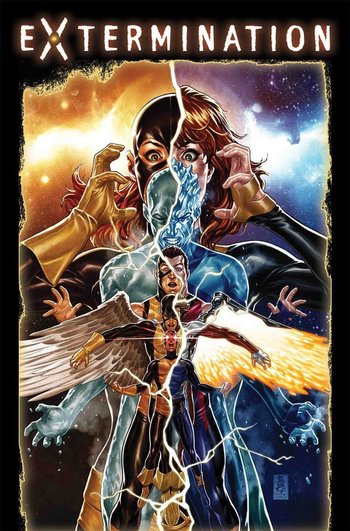 Exterminate the past. Eliminate the future.
Advertisement:

Extermination is a 2018 Bat Family crossover series published by Marvel Comics, written by Ed Brisson and drawn by Pepe Larraz.

Ever since they were transported from their time to the present-day Marvel Universe, the time-displaced original X-Men —Cyclops, Jean Grey, Iceman, Beast, and Angel— have (somehow) existed alongside their older selves.

But when a familiar foe comes to rid them from existence once and for all, it's all hands on deck for the X-Men past, present, and future to protect the time-displaced Original Five — or else.

Extermination is touted as the grand finale of a years-long story arc involving the time-displaced Original Five from All-New X-Men that started in 2012. Obviously, it promises nothing will be the same anymore for the X-Men moving forward.

Preceded by a series of stingers (titled Countdown to Extermination) that appeared in various X-Men titles note (X-Men: Gold #27, X-Men: Blue #27, X-Men: Red #5, Astonishing X-Men #13, Cable #159) that tease developments in the storyline. There is also the X-Men: The Exterminated one-shot that deals with some of the fallout from the event. Finally, the series also leads into a new X-Force ongoing.

Not to be confused with the 2001 video game of the same name, nor the 2012 comic book from Boom! Studios also titled Extermination, or even the (similarly-titled) 2013 storyline X-Termination, also starring the X-Men.