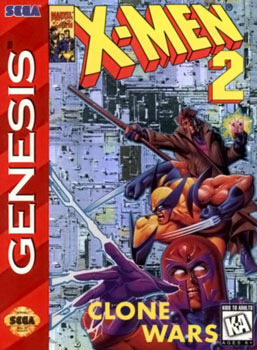 X-Men 2: Clone Wars is a 1995 platform game developed by Headgames and released by Sega of America for the Sega Genesis as a sequel to the 1993 side-scrolling video game X-Men (1993). The game is based on The Phalanx Covenant, a storyline about a parasitic alien race known as the Phalanx whose assimilation power curiously did not work on mutants. The game was praised by critics and won retrospective acclaim as one of the best games on the platform. It was supposed to be followed by a sequel titled X-Women: The Sinister Virus

, but that game was cancelled at an early stage due to the developer going bust.
Advertisement:

The playable characters are Cyclops, Wolverine, Nightcrawler, Gambit, Psylocke and Beast. Magneto also becomes playable after beating him at the end of the third level.