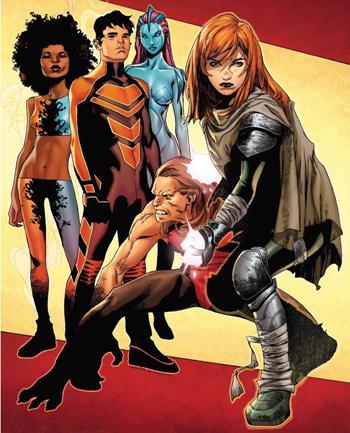 Generation Hope was a series spun off from the X-Men franchise that run from January 2011 to May 2012 with 17 issues. It finished as Avengers vs. X-Men began.
Advertisement:

It was based around Hope Summers, the adopted daughter of Cable and reputed "Mutant Messiah". Upon her return to the present after being raised in the future, a group of mutants manifested. As Hope met and touched each mutant their powers stabilized and Hope gained a low level of telepathic influence over them. The story of the series itself dealt with Hope making the "Lights" into a team to stabilize each new mutant manifestation, taking a Lighter and Softer approach than previous X-Men teen series while also dealing with the insidious effect of Hope's influence.

The team consisted of Hope, Velocidad, Oya, Transonic, Primal, and Zero, with Oya leaving post-Schism, being replaced by Pixie and No-Girl.