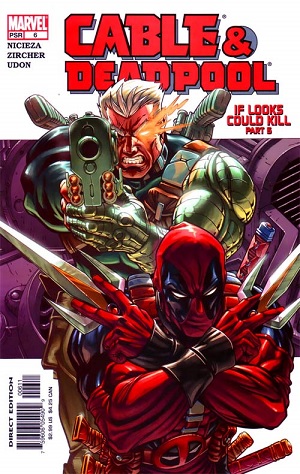 Wade Wilson and Nathan Summers are back — and this time, they're stuck with each other!
—Cable & Deadpool series tagline
Advertisement:

Cable & Deadpool was a Marvel Comics series that launched in 2004 and ran for 50 issues (May, 2004 - April, 2008). The whole point of the series was the Odd Friendship between Cable and Deadpool that began after the first six issues, where they were somewhere between fighting and helping each other due to their individual missions conflicting/collaborating during that arc. The series had been noted for its Buddy Picture overtones, the high-level of Genre Savvy possessed by all characters, and how it tied into major Marvel events (House of M, Civil War, and referencing One More Day) without the characters being derailed at all for the plot. The duo teamed up again from December 2015-March 2016, for the Infinite Comic Deadpool & Cable: Split Second.

Please only list examples suited to the series itself here. Cable and Deadpool both have their own pages.