Comic Book / Rise and Fall of the Shi'ar Empire 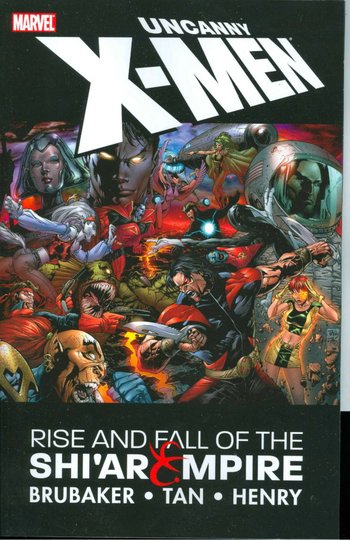 The story is a continuation of the events of X-Men: Deadly Genesis. In that story, it was revealed that Vulcan aka Gabriel Summers, the long lost brother of Cyclops and Havok, had served on an unknown team of X-Men who perished during an attempted rescue mission of the original five X-Men from Krakoa before Xavier recruited the "All-New, All-Different" team for that purpose. Two of Gabriel's teammates perished and Xavier erased Gabriel from Scott's memories to protect them from the truth. Gabriel also learned that he was a slave of the Shi'ar Empire and his mother had been killed by the Shi'ar monarch D'Ken. With this knowledge, Gabriel flew into space with the intention of revenge against the Shi'ar.

Fearing the danger Gabriel poses to anyone in his way, Xavier forms a team consisting of himself, Havok, Warpath, Nightcrawler, Polaris, Rachel Summers and Gabriel's only surviving teammate Darwin to stop him.

Rise and Fall of the Shi'ar Empire contains examples of: