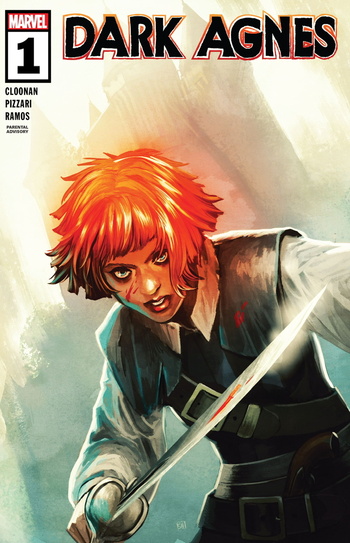 Robert E. Howard's Dark Agnes (often referred to simply as Dark Agnes) is a 2020 limited series from Marvel Comics, based on characters created by Robert E. Howard and licensed by Marvel. It’s written by Becky Cloonan with art by Luca Pizzari and Andrea Borccardo, and color art by Jay David Ramos.
Advertisement:

The series stars Agnes de Chastillon, an adventurer and outlaw in 16th century France. After fleeing an arranged marriage to a deeply unpleasant man, Agnes trained to become an expert with both blades and pistols. Now aided by her sidekick, Etienne Villiers, she seeks revenge and becomes embroiled in the plots of others.

Howard only completed two short stories about Agnes (Sword Woman and Blades for France), neither of which was published before his death. A third story (Mistress of Death) was still in draft form when he died. The Marvel Dark Agnes series is a sequel to those stories, not a direct adaptation, so doesn't directly retell her origin - which also means it starts at a point after some significant characters have died.

Agnes made her first Marvel appearance in another series, Conan Serpent War, which also starred Conan, Solomon Kane and Moon Knight, linking her into the shared Marvel Universe - although this is not directly referenced in her solo series. Similarly, although the final Howard story contained supernatural elements, none directly appear in the published Dark Agnes issues.

Dark Agnes was one of several Marvel comics Cut Short by the initial impact of the COVID-19 Pandemic, with only two issues published before supply chain issues forced Marvel to reduce their output. Marvel did not announce any attempt to complete publication of Dark Agnes before they lost the rights at the start of 2023.

Titan Comics, who gained the rights to Howard's characters in 2023, have announced plans for their own Dark Agnes series.