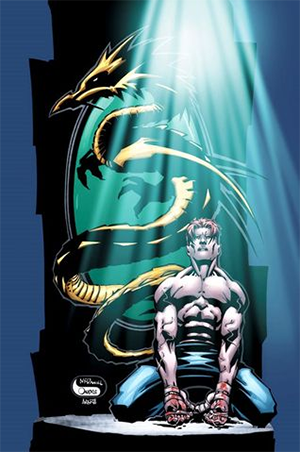 Now it's barely even news. Guys that fly and guys that run fast and guys with magic rings. I probably trained half of them how to throw a punch.
—Richard Dragon
Advertisement:

Richard Dragon is the chosen name of Richard Drakunovski, one of the DCU's premier martial artists. He was first created by Dennis O'Neil and Jim Berry for a pulp Kung-Fu novel titled Dragon's Fists: Kung-Fu Master Richard Dragon that was published in 1974 before the authors adapted Dragon and his tale into the comic series Richard Dragon, Kung-Fu Fighter for DC the following year. It is also the title of the twelve issue 2004 re-imagining of the character, who had last carried his own title in 1977.

The 2004 series catches up with Richard when he's in a bad place, with Bronze Tiger reminding him that although he used to be the best but he's slipped and lost his center.

The character called "Richard Dragon" after Flashpoint is an entirely different individual, a Green Arrow villain whose true name is Ricardo Diaz.