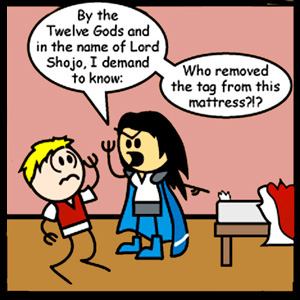 Some paladins take their job way too seriously.
"Under penalty of law this tag is not to be removed except by the consumer."
— Part of the text legally required on all mattresses, pillows and comforters sold in the U.S.
Advertisement:

These tags seen on mattresses and pillows are the subject of numerous gags. Most commonly they involve a goody two-shoes character who accidentally or intentionally removes one, and then assumes they're in danger of going to jail and ends up on the run. Note that in modern times, that part "except by the consumer" means that it doesn't even apply to those who are so worried about it. Even if it did, it wouldn't be nearly so much of a crime as people say it is. (Even if the authorities didn't have bigger things on their plate, like Arson, Murder, and Jaywalking, how would they know?) However, in the past, this phrasing wasn't there, making the worries slightly more legitimate.

The reason there is such a warning tag is that the tag lists such information as the materials used in making the mattress and the country of origin. Especially, that they are "new material only" — because of historical problems of furniture being stuffed with disease-ridden rags. Nowadays, it's a question of whether or not the mattress contains any allergens. Thus, it is illegal for the seller of the mattress to remove the tag, in order to protect the consumer. The words "...except by the consumer" have been there since at least the 60s, making this a Discredited, Dead Horse Trope. Can also cause bafflement to people from nations where such tags aren't put on mattresses.

Can overlap with Poke the Poodle, Felony Misdemeanor, Serious Business, and Jaywalking Will Ruin Your Life.

There is, however, one actual downside to tearing off the mattress tag: doing so voids the warranty.