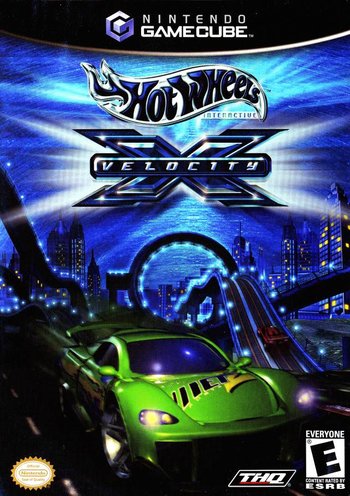 Drive like you've never imagined.
"Some kids play basketball after school. I have a reputation to defend."
— Max Justice
Advertisement:

Hot Wheels: Velocity X is a vehicular combat video game developed by Beyond Games and released by THQ for the PC, PS2, Gamecube, and Game Boy Advance in 2002, based off of Mattel's Hot Wheels toy line. A Game Boy Advance version exists with a "slightly" different plot.

A teenager named Max Justice has just finished up with a street race when he gets a distress signal from home. Arriving there, he finds the place wrecked. To make matters worse, there is a car robbery and bombing at his father's engineering plant immediately afterward.In retaliation, Max goes to find those responsible, and retrieve the stolen cars. However, things turn out to be much more dangerous than they seem.