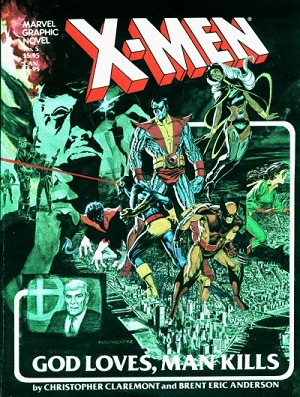 "Once more, genocide in the name of God. A story as old as the race."
—Magneto
Advertisement:

A Graphic Novel first published in 1982, God Loves, Man Kills is one of the most famous X-Men stories from the Claremont period. Writing in the midst of the rise of televangelists of the 1980s, Chris Claremont and artist Brent Anderson presented a story with a new foe for the X-Men who stood out from previous villains: the Reverend William Stryker, a Sinister Minister who believes mutants are demons from hell that must be completely eradicated.

In 2020, Marvel released a 2 issue extended cut of the comic.