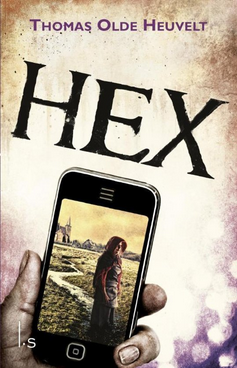 Original Dutch cover art
Hex is a Dutch horror novel by Thomas Olde Heuvelt which has been translated into a number of different languages, including English. In these translations the book has been slightly rewritten; while the original version of the story takes place in the Netherlands, the international version moves the action to the United States.

Black Spring is a seemingly picturesque Hudson Valley town haunted by the Black Rock Witch, a seventeenth-century woman whose eyes and mouth are sewn shut. Blind and silenced, she walks the streets and enters homes at will. She stands next to children's beds for nights on end. So accustomed to her have the townsfolk become that they often forget she's there. Or what a threat she poses. Because if the stitches are ever cut open, the story goes, the whole town will die. The curse must not be allowed to spread. The elders of Black Spring have used high-tech surveillance to quarantine the town. Frustrated with being kept in lockdown, the town's teenagers decide to break the strict regulations and go viral with the haunting. But, in so doing, they send the town spiraling into a dark nightmare.