Series / Johnny and the Sprites 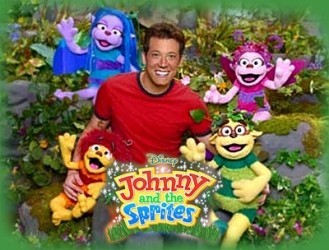 If you should rove to Grotto's Grove, come join in the song, you can sing it too!
"I was Johnny, till I walked through that door. But I'm not just Johnny anymore. I'm Johnny... and the Sprites! Did you see one? ..."
—The show's premise is explained in song.

Johnny and the Sprites (2007-2008) features the adventures of an ordinary guy (John Tartaglia of Avenue Q fame) who moved to a house in the woods to work on his music on his own. Much to his surprise, he discovered that these woods were inhabited by Sprites, friendly fairy-like creatures who possess magic, but are largely unfamiliar with the ways of the human world. Normally shy creatures, two of them, a boy named Basil and a girl named Ginger, take a shining to Johnny and they become fast friends, with Johnny teaching them many new things and sharing his music in the process.

The series began as a set of five animated shorts aired every so often Disney Channel's Playhouse Disney block. These segments proved so popular that the program was greenlit for a full series. The new series brought a greatly expanded set portraying the Sprites' home of Grotto's Grove, as well as new characters. Three new Sprites were added, Water Sprite Lily, Earth Sprite Root and a wise old Sprite named Sage, puppeteered and voiced by Tartaglia. Additionally, a character named Gwen, portrayed by Natalie Venetia Belcon, was brought on as a friend for Johnny who paid semi-regular visits. The second season of the full series saw a further expansion to the set, as well as a seminal change to the program when Gwen was allowed to finally meet the Sprites for the first time and both she and Johnny gained the ability to visit Grotto's Grove. The presumed final episode of the series was aired on April 19, 2008 and the program disappeared from U.S. airwaves, though both a music album and DVD were released. Repeats of the program began airing on the 24/7 Disney Junior network in 2012. Tartaglia has since moved on to other projects, such as the musicals of Beauty and the Beast and Shrek , and much later on, creating Splash and Bubbles .