I am preparing other surprises that are even more marvelous and more fantastic for you and for all my beloved Golden Ticket holders — mystic and marvelous surprises that will entrance, delight, intrigue, astonish, and perplex you beyond measure. In your wildest dreams you could not imagine that such things could happen to you! Just wait and see!
From Mr. Wonka's message on each Golden Ticket
Advertisement:
Played by:
Gene Wilder (1971 film)
Johnny Depp (2005 film)
Daniel Okulitch (2010 opera's 2012 recording)
Douglas Hodge (2013 musical's Original London Cast Recording)
Christian Borle (2017 Broadway Retool of the musical)
J.P. Karliak (Tom and Jerry: Willy Wonka and the Chocolate Factory)

The most famous chocolatier in the world, and a Reclusive Artist ever since he was forced to temporarily close his factory due to espionage on the part of his rivals. The Impossibly Delicious Food his factory churns out, combined with the mystery of how he makes it when no one is seen entering or leaving the factory, has made him a Living Legend, and when he launches the Golden Ticket contest — five winners will receive a personal tour of the factory and a lifetime's supply of sweets — it becomes a global obsession. But all the tales that have sprung up around him and his factory pale next to the reality those winners are about to discover. Mr. Wonka spent his years in hiding turning his factory into The Wonderland, an Elaborate Underground Base of incredible beauty — some of it edible — that has technology as amazing as it is absurd; a world created in his own eccentric image. He is highly intelligent, imaginative, and fundamentally good, but also The Trickster who operates on a different plane of reality than the rest of the world. Whimsical though he may be, he is someone to be taken seriously.

. As Mr. Wonka is an Interpretative Character to rival a certain Time Lord, further details about his personality in each major adaptation are summarized along with respective tropes. 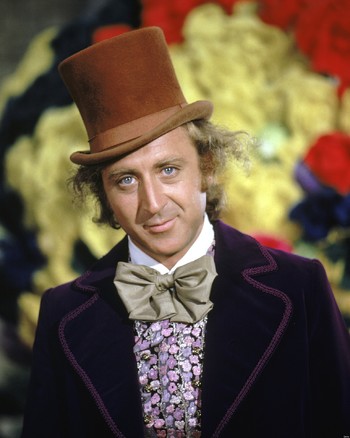 "Are we ready? Yes. Good. On we go!"
Mr. Salt: What is this, Wonka, some kind of fun house?
Mr. Wonka: (seemingly surprised) Why, having fun?

This Wonka is gracious, friendly, pleasant, exceptionally well-read — and simply cannot be trusted. Unfortunately, by the time that last point is figured out by his guests, they have no choice but to keep following his lead no matter how wild and woolly things become. Moreover, virtually nothing gets past him, which becomes a problem for Charlie in the late going... 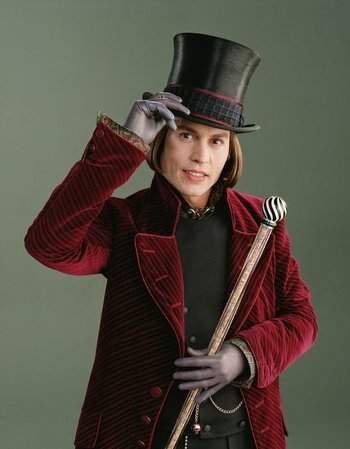 "Good morning, star shine! The Earth says 'hello'!"
Everything in this room is eatable. Even I am eatable, but that is called "cannibalism," my dear children, and is in fact frowned on in most societies.

This youthful-looking fellow is at least as brilliant as any of his other incarnations when it comes to sweetmaking, but unlike them is completely lacking in social skills and graces to the point that even the Golden Ticket finders come off as more mature than he. His arrested development stems from a heartbreaking experience in his past that he has never quite been able to put behind him — and is coloring what he wants from a successor in the present.

2010 Opera
Yes, it's me!
I, Willy Wonka, the great and magnificent!
I, the sorcerer! I, the scientist!
I, the magician!
I, the weaver of chocolate spells!
I, the creator of sugary secrets!
I, the mysterious! I, the unknown!
I, Willy Wonka, greet you all!

A grandiose, commanding figure with a Badass Baritone, he is noticeably less wacky and snarky than his counterparts, his eccentric appearance notwithstanding. He is also leading a double life as the owner of a sweetshop that Charlie sometimes visits... 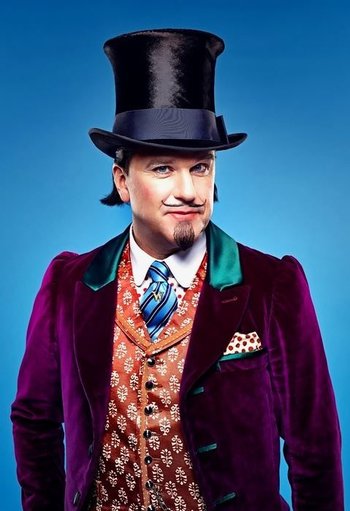 "For it must be believed to be seen."
Let's hope that you're a bit like me
As you walk through my factory
For in the end there's quite a prize
If you can see with more than eyes...

Sugar and ice, as opposed to spice...that's what the most intimidating Wonka to date is made of. Beneath mannerisms, style, wit, and lack of sympathy worthy of a Large Ham Disney Animated Canon villain, there lies the soul of a sensitive, if mad, artist. But in a world where even children seem to toss away their potential for creation in favor of consumption as soon as they're able, is there a kindred spirit that can melt the ice around his heart? 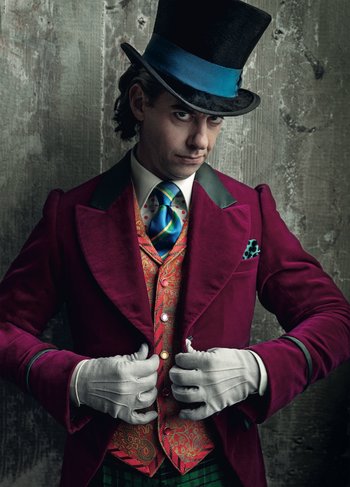 "Do come in."
There comes a time in every chocolatier's life
When the chocolate he makes turns dark and bitter
That's when he knows it's time to lay down his spoon
To hand it over to someone else. Someone new!

The Broadway production substantially expanded Mr. Wonka's role in the story, via a plot device similar to that of The Golden Ticket — in Act One, he masquerades as the owner of a candy shop in Charlie's hometown and interacts with the boy. The following additional tropes are thus invoked.