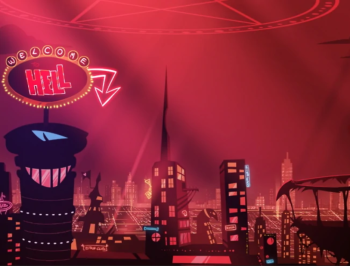 City of the dead
At the end of another lost highway
Signs misleading to nowhere
City of the damned
Lost children with dirty faces today
No one really seems to care
— Green Day, "Jesus of Suburbia"
Advertisement:

When Hell is a city, it often represents the worst things you could imagine about cities: inescapable poverty, omnipresent street crime, Police Brutality, corrupt and uncaring government, arson (because what is Hell without a little fire?), factories spewing pollution in the air and drinking water, child labor, public buses reeking of piss and all you'll have to eat is each other and that Burger King next to the bottomless pit. The biggest difference between Hell and The Big Rotten Apple is that all of the police and rich people exploiting you have red skin and horns on their heads, the pimps and prostitutes are all succubi and incubi and suicide isn't an option.

If Hell is divided into Circles, the City setting is reserved for only one of them, the rest of Hell including lush countrysides in perpetual war, oceans full of dead fish and sea monsters, volcanic calderas and pulsating caverns of blood and bone. In these cases, the urban Circle may be portrayed as being where the leadership of Hell resides. When these cities are given names, they are often referred to as Dis or Pandemonium, after this trope's formative examples in the Divine Comedy and Paradise Lost.

Sub-Trope of Hell. See also Mundane Afterlife for similar depictions of the afterlife as similar to Earth. Not to be confused with Vice City.