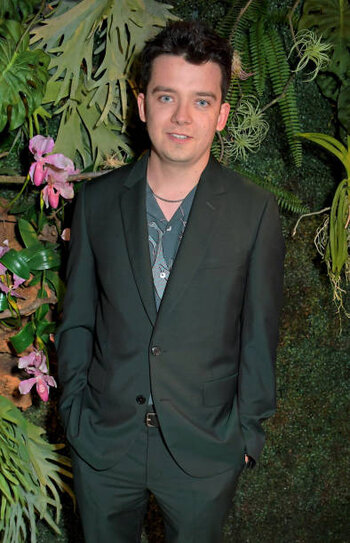 Look at those blue eyes.
Advertisement:

He began acting at age 8 after he was spotted by a casting director at a local drama club, and soon did the Made-for-TV Movie After Thomas. From there he had a supporting role in Son of Rambow before doing an episode of Ashes to Ashes (2008) in 2008. In the same year he won the recurring role of the infamous Mordred in The BBC's Merlin — a role not dissimilar to his successful performance in Rambow, possibly why he was cast. Released around the same time was the film adaptation of The Boy in the Striped Pyjamas, in which he starred.

Butterfield was still attending regular school like any other boy and would put his career on temporary hold from the Autumn of 2008, when he began secondary school, with a supporting role in The Wolfman followed by the lead in the sequel to Nanny McPhee released in 2010. In these films he played alongside people like Sir Anthony Hopkins and Emma Thompson, and his own real stardom began. Following this he got the lead in Martin Scorsese's adaptation Hugo, leading the renowned cast comprising Sir Ben Kingsley, Sacha Baron Cohen, and Chloë Grace Moretz. He also played the titular Ender Wiggin in Ender's Game, again heading up the All-Star Cast, including Sci-Fi veteran Harrison Ford.

After finishing up Ender's Game, Butterfield worked on several other films, including Miss Peregrine's Home for Peculiar Children, The Space Between Us, and Slaughterhouse Rulez. He most recently appeared in Sex Education, where he plays the protagonist Otis Milburn.

As an esports player, Butterfield has played at the Nintendo World Championships in New York in 2017 and Genesis 6 in Oakland, California in 2019. He was signed onto Team Liquid in October 2020 under the username "Stimpers." Butterfield has also bridged the gap between acting and professional gaming when he was signed onto Panda Global in 2018 as a brand ambassador to promote the esports team to a wider audience, taking advantage of his fame.

Tropes applied to his works: