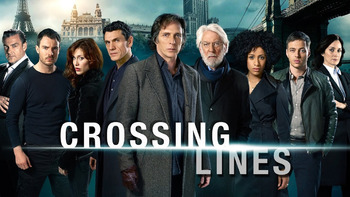 Crossing Lines is a 2013-15 Crime Drama series about a Multinational Team of elite crimefighters working under the International Criminal Court. They go after Serial Killers and other high-level criminals who try to hide by crossing the borders inside the European Union.

Detective Carl Hickman (William Fichtner), formerly of the NYPD, was shot in the line of duty; he can no longer use his right hand. He is living in a carnival in Amsterdam, when he is approached by Detective Major Louis Daniel (Marc Lavoine) to join a new investigative unit under the International Criminal Court. Major Daniel’s son was killed by a bomb planted at his house. Michel Dorn (Donald Sutherland) is helping Major Daniel set up the new group to spot serial crimes being disguised by crossing the borders between European countries; he is also investigating the murder of Daniel’s son. He has worked with both Louis Daniel and his wife Rebecca(Elsa Mollien), who prosecuted cases before the ICC previously.

Other team members come in from across the EU.

The show was dropped by NBC due to poor ratings (2.06 million for the season one finale), but was picked up by Amazon Prime Instant Video for the second season (which debuted on August 15, 2014 in Europe). The second season has since appeared on various file sharing websites and is also available on Netflix.

A third season was made, but the only returning cast members were Sutherland, Wlaschiha and Rossi. To say that fans were... unhappy about this is a massive understatement. The series ultimately concluded with its third season in December of 2015.