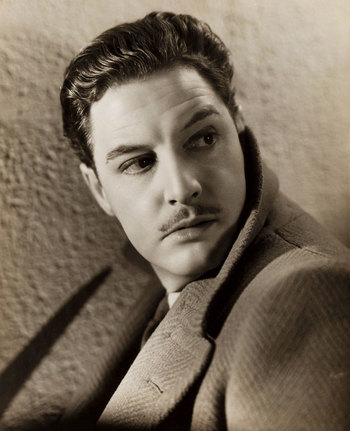 After a rich theatre education from the age of 16, and touring in Sir Francis Benson’s Shakespearean company for four years, his first film of note was The Private Life of Henry VIII (1933). More success came his way with the 1934 adaptation of The Count of Monte Cristo. A modest and self-deprecating man, Donat never thought much of his acting talents even when critics lauded his naturalistic acting style in the aforementioned film, his only made in Hollywood. Big fan Judy Garland even wrote him a fan letter and would consider him her favourite actor.

On the cusp of fame, he declined the role of Captain Blood—which went to Errol Flynn, making him a bonafide star—and instead starred in his most famous role, the Alfred Hitchcock classic, The 39 Steps, as Richard Hannay, an innocent man framed for murder. He turned down other roles for Hitchcock (Sabotage & Rebecca) and stayed in Britain where he could still work on the stage and star in films.

After signing with British Metro-Goldwyn-Mayer, Donat gained critical acclaim with The Citadel (1938), and also received his first Academy nomination. In 1939 came his biggest success, as Charles Chippings in the Academy Award nominated, Goodbye, Mr. Chips. Donat won the Academy Award for Best Actor, beating big names like Clark Gable for Gone with the Wind, Laurence Olivier for Wuthering Heights, and Jimmy Stewart for Mr. Smith Goes To Washington.

Much to his detriment, more health issues ensued, stemming from his problems with asthma that had only gotten worse over the years. He made few films in the 1940s, one being a wartime romance, Vacation from Marriage (1945), with the young Deborah Kerr, and the 1948 adaptation of The Winslow Boy.

In 1949, he starred in, directed, wrote, and produced the forgotten comedy The Cure for Love, and made only three more films before succumbing to a brain tumor and cerebral clotting in 1958 at the age of 53.