Film / The Adventures of Tartu 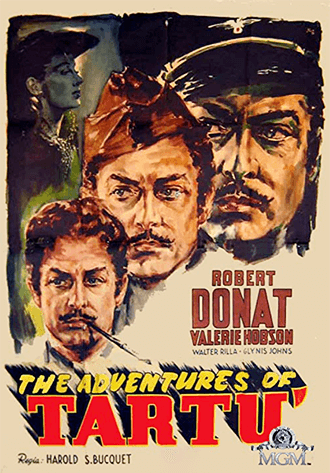 The Blitz blazes on in England, but Captain Terence Stevenson (Donat), has been reassigned: he must become a saboteur and destroy a gas plant in occupied Czechoslovakia. Disguised as the recently deceased Jan Tartu (a Romanian of the Iron Guard), Terence finds his mission doubly difficult given that his contact to the underground was killed.

Sent to a boarding house where the owner and her daughter, Paula (Johns), a Nazi officer called Otto, and the beautiful, yet haughty Marushuka (Hobson) live, he tries his best to keep up appearances as a Nazi working in a munitions factory while also trying to find his fellow conspirators.

Having never been renewed for copyright, this film is in the public domain