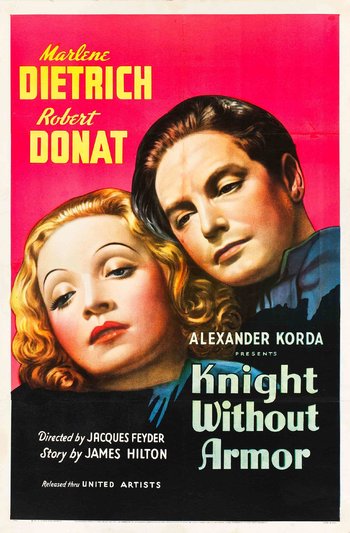 Knight Without Armour (1937) is a British historical drama film set during the Red October Revolution, based on the James Hilton novel of the same name. It was produced by Alexander Korda, directed by Jacques Feyder, and stars Marlene Dietrich and Robert Donat. The music score was composed by Miklós Rózsa.

A. J. Fothergill (Donat) is a spy for the English government, sent to keep an eye on the brewing Red Revolution. Implicated in a conspiracy to kill Countess Alexandra’s (Dietrich) father, he’s sent to Siberia for the duration of World War One, but when the Communist Revolution comes, A. J. is a hero and is made a Commissar in the new government.

The newly captured Countess Alexandra is to be executed, and A.J. is to take her to Petrograd for this grim end; however, A.J. has plans to save the Countess, and they both try to survive as civil war unfolds around them.

This was an all-out historical epic with a $1 million budget, but it failed to be a box office success. It was also cited by critics at the time as one of several films that made Dietrich "box office poison."