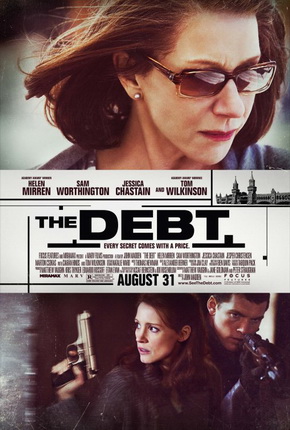 "The truth stays in this room with us."
Advertisement:

The Debt is an Israeli espionage drama released in 2007 and an American remake released in 2011. The latter stars Helen Mirren, Sam Worthington, Jessica Chastain, Ciarán Hinds and Tom Wilkinson.

The original film was set in Israel, 1997, and Berlin, Germany, 1965, and follows three young Mossad agents, Ehud, Zvi, and Rachel. In 1965, the three agents were sent to Berlin to capture a Nazi war criminal named Dieter Vogel (a.k.a. the Surgeon of Birkenau). Despite careful planning, their inexperience and poor luck threaten their mission. The film cuts between 1965 and 1997, where the three agents deal with the aftermath of their mission 30 years later.

Not to be confused with the 1999 Polish movie.