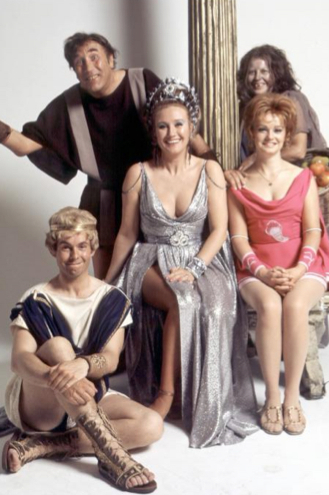 1970s British sitcom ostensibly about the humorous misadventures of a Roman slave, Lurcio, before Vesuvius erupted. In reality, it was merely a vehicle for comedian and actor Frankie Howerd, who would frequently drop out of character to speak to the audience and complain about the quality of the scripts, plots, acting and even the audience themselves.

Based on A Funny Thing Happened on the Way to the Forum, itself based on the Roman comedies of Plautus and Terence, which were in turn based on the Greek New Comedy of Menander.

The series got a film adaptation in 1971. The film was followed by two sequels, Up the Chastity Belt and Up the Front, which also starred Howerd and relocated the setting to Medieval England and World War I France respectively.