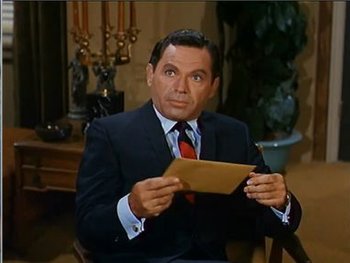 One of the busiest character actors of all time, Nehemiah Persoff was born August 14, 1919, in Jerusalem. He moved to the States with his family in 1929 and settled in New York City. Eventually, he became interested in acting, making his stage debut in 1940, in a production of The Emperor's New Clothes.

After a stint in the Army during World War II, Persoff went to study under the legendary Stella Adler. That led to him being discovered by another legend, Charles Laughton, who cast him in the play Galileo. Laughton, unable to pronounce 'Nehemiah', gave Persoff the nickname of 'Nick'. In 1948, he made his acting debut with an uncredited part in The Naked City.

Persoff appeared in a number of famous films ranging from On the Waterfront to Twins, but television proved to be his forte. A dependable and versatile actor, he started by appearing in anthology series in the 1950's, and later appeared in hundreds of television series over five decades, in shows ranging from Gilligan's Island to Law & Order.

If any actor exemplifies the Fake Nationality trope, it is Nehemiah Persoff, who has played pretty much every nationality you can name. Some examples:

Additionally, he has played historical figures Josef Stalin (in the TV-movie FDR: The Last Year) and Leonid Brezhnev (in the mini-series Sadat).

Persoff retired from acting in the late '90's, but he still is very much active, having went from being a beloved character actor to a beloved artist, whose paintings sell for decent amounts of money. He's still going strong with his artwork, having turned 100 in 2019.