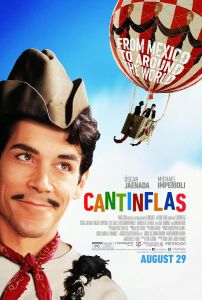 Cantinflas is a 2014 Mexican film, based on the life and exploits of the Mexican comedian Mario Moreno aka "Cantinflas" (played by Spaniard actor Óscar Jaenada) and showing his humble beginnings to his rise to international stardom.

The film begins when the producer (and future husband of Elizabeth Taylor) Mike Todd (played by Michael Imperioli) tries to bring together the cast for Around the World in 80 Days (1956) and he tries to ask Cantinflas, who was at the top of his career, to participate in the film. He has a few days to do so, otherwise he'll lose all the financial backing and the rights of the film.

While this is happening, most of the film shows the life of Cantinflas from his beginnings, first as a boxer, as a bullfighter and later as a theater comedian and as a movie actor, while finding the love of his life in Russian actress Valentina Ivanova and dealing with his new acquired fame.

Cantinflas decides to exclude Estanislao from any event with him at the spotlight, without showing any trace of rage in his face. Justified, being a public figure now, he has to now keep his face]].