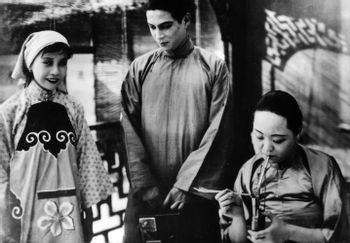 Peach Blossom Weeps Tears of Blood is a 1931 silent film made in Shanghai, China. It is also known as The Peach Girl. It was directed by Bu Wancang and stars Ruan Lingyu (The Goddess) and Jin Yan.

Lim (Ruan Lingyu) is Miss Lim, daughter of Loo Chi, a tenant farmer who works a plot of land somewhere in the country. She falls in love with King Teh-en, son of the upper-class woman who owns the land that Loo Chi works. Teh-en asks Lim to marry him, and she accepts, but his snobby mother refuses to approve the match. Teh-en, for his part, can't bear to let Lim go. Tragedy ensues.