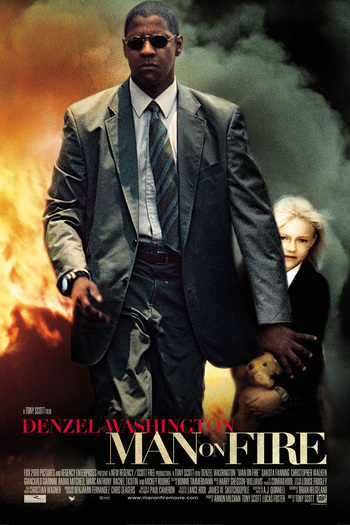 John Creasy is about to keep some people warm for the rest of their lives.
Lisa Ramos: What are you gonna do?
John Creasey: What I do best. I'm gonna kill 'em. Anyone that was involved. Anybody who profited from it. Anybody who opens their eyes at me.
Lisa Ramos: You kill them ALL.
Advertisement:

Man on Fire is a 2004 film directed by Tony Scott and starring Denzel Washington. It is based on A.J. Quinnel's 1980 novel of the same name, which was previously adapted into film in 1987.

In Mexico City, criminal gangs have been kidnapping rich people and their families for the ransom money. On the advice of his lawyer, Mexican businessman Samuel Ramos, like other wealthy people, hires a bodyguard to protect his nine-year-old daughter Lupita "Pita" Ramos (Dakota Fanning), and to be able to renew the family's ransom insurance. The head of an executive security firm, Paul Rayburn (Christopher Walken) suggests that Ramos hire Rayburn's old CIA buddy John Creasy (Denzel Washington).

However, Creasy has since become uninterested in life. He is burned out from all the death and horror and has taken to alcoholism to ease the burden. Creasy is not interested in bodyguard work and even less with the youngster, but he needs a job. Creasy's initial impatience slowly fades as he finds himself opening up to the child.

Then Lupita gets kidnapped.

Her ransom does not go as planned.

And everything goes to hell.

And then Creasy starts unleashing his own hell on the responsible ones.

If you came here to read about a the trope in which someone gets set on fire, that's elsewhere.