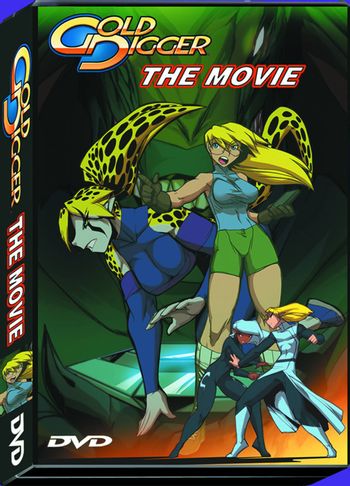 Gold Digger: Time Raft (a.k.a Raft of Time or just simply The Movie) is a OVA based on the Gold Digger comic book series by Fred Perry. It was completely produced and animated (hand-drawn animation, to boot, though drawn on a tablet PC) by Fred himself, who took animation classes and did intensive reference reading and viewing to make sure it was done right. The project started in 1999, and the video was initially released in parts and sold through the Antarctic Press store or at cons. Eventually, the whole thing reached completion in 2010, and all three parts were compiled into one full movie. To date, it's the one of the only fully major animated productions for the Gold Digger series (not counting the uncolored shorts on YouTube set to music).

The plot is based on the pilot story of the comic book series, which sees archeologist/scientist Gina Diggers and her adopted were-cheetah sister, Britanny Diggers, on an expedition to locate the fabled Time Raft which, just as its name implies, can take the user through time. However, they discover the raft is guarded by a dragon named Dreadwing, who has his own plans for the raft. Gina's arrival presents him the perfect opportunity to activate it.