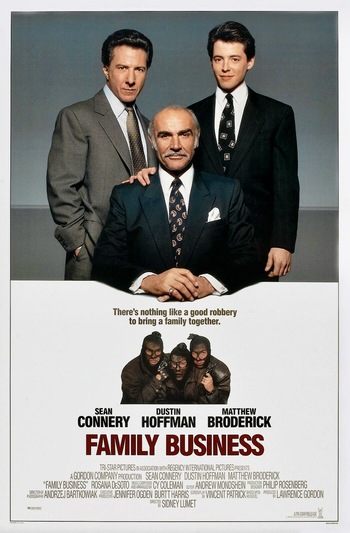 You can totally see the family resemblance.
Advertisement:

Family Business is a 1989 caper film directed by Sidney Lumet, with a screenplay by Vincent Patrick based on his novel. It stars Sean Connery, Dustin Hoffman and Matthew Broderick.

Jessie McMullen (Connery) is the Scottish-American patriarch of a family of career criminals, including his half-Sicilian son Vito (Hoffman) and grandson Adam (Broderick). Vito has left a life of crime behind, but the college-educated Adam remains loyal to his grandfather. Reluctantly, Vito joins his father and son on a big-time heist involving millions of dollars' worth of test-tube specimens.