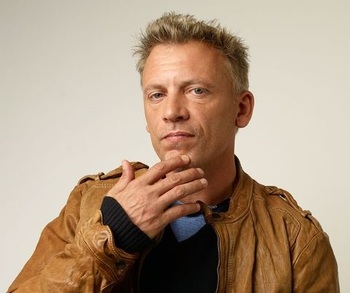 A talented Canadian actor with a knack for playing bad guys and troubled rogues, Callum Keith Rennie (born September 14, 1960 in Sunderland, England) would probably be recognised by most US audiences by his face if not by his name. He's been in everything from The X-Files: I Want to Believe to Supernatural to Battlestar Galactica (2003), and had a chance to make it big in Hollywood in the 90s but opted to remain in Canada instead. He's probably best known for Due South, and Hard Core Logo as well as Christopher Nolan's breakout film Memento; but Wilby Wonderful, in which he plays a character wildly different from his usual type cast, and Shattered, in which he plays a detective with multiple personality disorder, really put his acting chops on display. But his filmography isn't always quite so illustrious: he's also participated in projects such as Slapshot 2. Whatever the part, you can count on him to make things better just by showing up.

Born to Scottish parents in Sunderland, England, in 1960, Rennie and his family immigrated to Edmonton when he was four. He dropped out of college and was interested in various lines of work and pursuits—including mountaineering, painting, and bartending—and was eventually asked by friends to participate in a radio show on University of Alberta campus radio station CJSR, which eventually led him to acting. Rennie struggled with alcoholism throughout his teens and twenties, into the beginning of his acting career. He's candid about his addiction, and it clearly informs his portrayal of certain characters.

Rennie's turbulent past, bad boy image, and eye-catching charm has earned him a reputation as "Canada's James Dean"—something which he objects bitterly to, describing it as a romanticization of an incredibly difficult period of his life. Moreover, the media often focuses in on aspects of his alcoholism such as an infamous 1993 barroom fight, but "when I read that it makes me cringe, because it makes it sound like I was a bad ass and I was really just someone who'd got lost in their life and I had sandals on. OK? I had sandals on and I wasn't looking for trouble."

Affectionately referred to as "CKR" by his fanbase, Rennie's stardom has faded somewhat since his 90s heyday. However, he is still very prolific, still semi-frequently interviewed and has been featured in magazines periodically for various reasons, and his recent castings in Fifty Shades of Grey and Warcraft (2016) may once more garner him attention from outside of Canada. He also had a major role in the second season of Jessica Jones (2015) where he played a perfectly nice and good-natured doctor who felt guilt about his actions causing harm to people. He has won three Leo Awards, two Gemini Awards, two Genie Awards, best actor in a Canadian film from the Vancouver Film Critics Circle, and the list continues.

Has a small but enthusiastic fandom and a penchant for rock climbing, golf, and messing with reporters. A small holdover contingent of the Due South fandom from the infamous Ray Wars still view him as a controversial actor. Also see Six Degrees Of Canada.