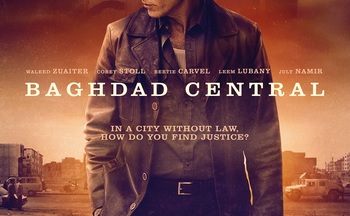 Baghdad Central is a 2020 TV drama series produced by Channel 4, based on the novel of the same name by Georgetown Associate Professor Elliot Cola. In North America, it's streamed by Hulu.

Like the novel, it centers on Muhsin Kadr al-Khafaji, an ex-police inspector of the Saddam-era Iraqi Police who's keeping a low profile after an American-led coalition force invaded the country and toppled Saddam from power. In the aftermath, all Saddam-era intelligence and security forces were disbanded on orders of the Coalition Provisional Authority.

Muhsin was subjected to an arrest after being mistaken for a high-profile Ba'ath official after being detained in Abu Ghraib Prison. He eventually works alongside CPA military police forces led by Captain John Parodi and Frank Temple, an experienced Metropolitan Police officer sent to Baghdad to plan out the establishment of the post-Saddam (and post-CPA) Iraqi Police Service. Muhsin works on a case where several Arabic to English translators have went MIA, including Muhsin's daughter Sawsan. Suspecting something is going on, Muhsin works as a plainclothes officer while he goes around Baghdad, including the Green Zone, to investigate who's trying to gain from the missing translators.

Be warned of spoilers. The production team has mentioned that while the novel is adapted for TV, several characters and events were added to make it distinct.