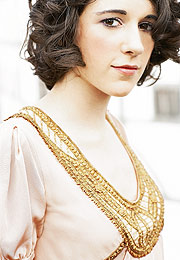 Eleanor Lucy V. Kendrick (born 6 June 1990 in London, England) is a young English actress whose most famous role has been as Anne Frank in the 2009 BBC TV miniseries The Diary of Anne Frank. Though she had not read the diary before being cast, she quickly learned the part, and her performance was widely praised. One of Anne Frank's cousins even said Ellie was the best actress to have played the role.

She is a former member of the National Youth Theatre, and studied English at Cambridge. Ellie has also appeared in An Education with Carey Mulligan, the revived Upstairs Downstairs, and the original British version of Being Human (UK).

She is openly lesbian.