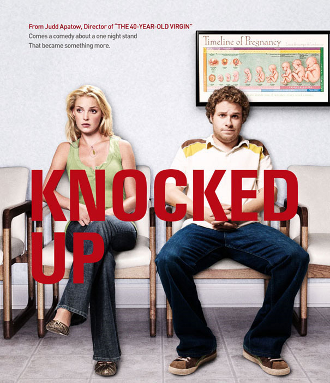 Ben Stone (Seth Rogen) is a carefree stoner who lives with his eccentric group of friends. He has no job, money from a settlement check that he carelessly splurges, and very little ambition. In fact, his main concerns in life are getting high, and working on a website that he and his buddies designed which catalogs the nude scenes of female celebrities in popular cinema. Little does he know that his life is about to be irrevocably changed when he goes out to a club one night and meets...

Allison Scott (Katherine Heigl), who is an up and coming entertainment journalist for the E! television network, out celebrating her recent promotion to an on-camera position. Though young and attractive, Allison has had little time for dating as her focus has been entirely on work and advancing her career. The two meet while trying to get the attention of the club's bartender, and they hit it off. Several hours (and many drinks) later, a tipsy Allison invites Ben home with her, where they have what they believe to be a drunken one-night stand.

The next morning, Ben and a remorseful Allison say their good-byes, thinking that they will never see each other again. This plan is drastically altered when, 8 weeks after her encounter with Ben, Allison starts feeling ill in the mornings and she panics when she realizes that she missed her period last month. A few dozen pregnancy tests later, her worst fears are confirmed: she's pregnant, and the only man that could possibly be the father is the last man she would ever see herself having a long-term relationship with.

This Is 40 is a Spin-Off movie or "sort-of sequel" written and directed by Apatow that follows the lives of Allison's sister Debbie (Apatow's real life wife Leslie Mann) and her husband Pete (Paul Rudd) five years later. It was released in December 2012.