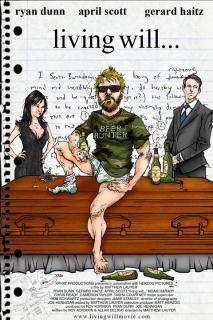 Living Will is a 2011 independent film directed by Matthew Lauyer and starring Ryan Dunn, in what would be his final film role.

After suffering with a severe bout of constipation, stoner/slacker Belcher (Dunn) dies unexpectedly of a brain aneuryism. His best friend, Will, is heartbroken. That is, until he meets Belcher's cousin, Krista, at the funeral. The two hit it off, and Will soon contemplates asking her to move in...until Belcher returns, in the form of a ghost that only Will can see. Soon Krista, Belcher and Will's ex Tammy fight for Will's attention, while Belcher must cope with the limitations of being dead.

In an eerie case of life imitating art, actor Ryan Dunn was killed in an accident only a few months before the movie was due for release.