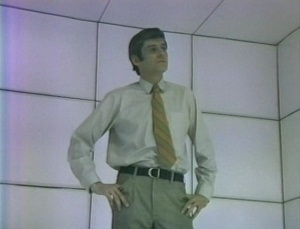 Which door to leave through?
Ms. Bix: How many hours a day do you spend in here, anyhow?
[Arnie whispers in her ear]
Ms. Bix: Good heavens! He can't spend the rest of his...!
Advertisement:

The Cube was an hour-long teleplay that aired on NBC's weekly show NBC Experiment in Television on February 23, 1969. The production was produced and directed by puppeteer Jim Henson, the screenplay co-written by long-time Muppet writer Jerry Juhl (who also appears in a cameo).

The story follows Richard Schaal as a man trapped in a cubical white room that anyone else could enter and leave, but which he himself apparently could not leave. The main character, simply named The Man in The Cube, is subjected to an increasingly puzzling and frustrating series of encounters as a variety of people come through various hidden doors. But as many remind him, he can only leave through his own door, so he must find it.

Not to be confused with Cube.