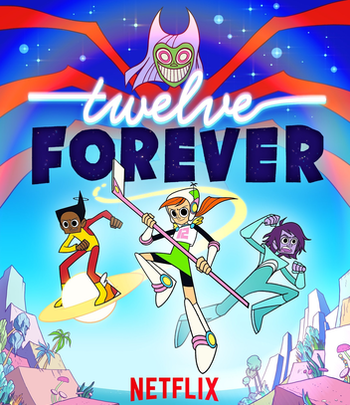 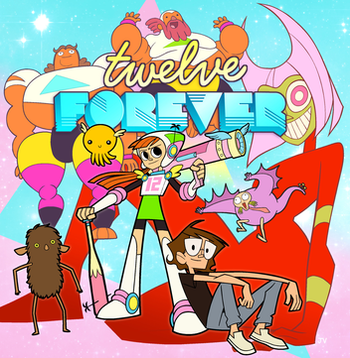 Twelve Forever is a Netflix animated series created by Julia Vickerman (Yo Gabba Gabba!, Clarence), with Shadi Petosky (Danger & Eggs) serving as showrunner. Originally a Cartoon Network pilot that premiered online on May 18th, 2015, the show was greenlit as a Netflix production two years later

The series follows the adventures of Reggie Abbott, an imaginative 12-year-old girl. Feeling frustrated with the new challenges she is facing between puberty and the rapid changes in her life, Reggie wishes that she would never have to grow up. This wish comes true thanks to a magic key she creates. It grants her the power to travel to Endless Island, a weird and fantastical world where she doesn't have to face the looming responsibilities and stresses of adulthood. Now she and her friends Todd and Esther can visit this magical world as much as they like in order to relax and have fun. But not everyone in this world is benevolent, with the villainous "Butt Witch" and other threats wanting nothing more than to cause trouble for Reggie and company.

Two months after the series premiered, Shadi Petosky revealed on Twitter that there wouldn't be future seasons, due to the costs of moving to another animation studio, and wanting to move on to do live-action work. While Netflix were not to blame for the cancellation either, the controversy mentioned on the Trivia page that surrounded Julia Vickerman became too great of a risk to renew, and so was Quietly Cancelled.

The Netflix series trailer can be seen here

I'm just so dissatisfied
All I want is to feel alive
I am now how I need to stay
Never want anything to change
I'll be happier than all of you
And I'm going to be forever
Be forever, be forever...
Feedback