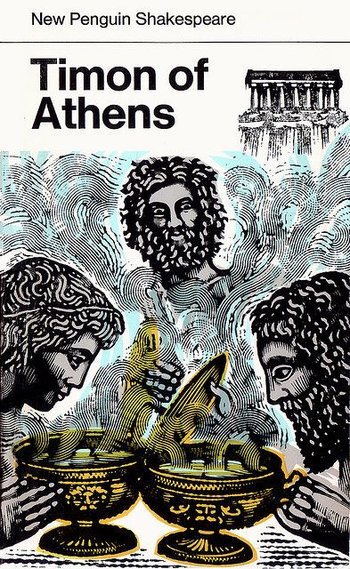 "Here lies a wretched corse, of wretched soul bereft:
Seek not my name: a plague consume you wicked caitiffs left!
Here lie I, Timon; who, alive, all living men did hate:
Pass by and curse thy fill, but pass and stay not here thy gait."
—Epitaph of Timon of Athens, V.iv
Advertisement:

One of William Shakespeare's more obscure and difficult plays, Timon of Athens is about an overly generous man who becomes a misanthropic hermit after going bankrupt and being cast off by his friends. It is believed to be a collaborative work, with most critics pointing to Thomas Middleton as the co-writer. It has been called Shakespeare's "least loved play." The play is inspired by an episode mentioned in Plutarch's Parallel Lives (precisely Life of Antony) as well as the satire Timon the Misanthrope by Lucian of Samosata.

Timon is an extremely, almost overly, generous Athenian lord. He surrounds himself with flattering cronies, rewarding their flattery with lavish gifts. He holds a massive feast and invites all his friends, many of whom he helped with personal problems by throwing money at them. The only one in attendance who doesn't suck up to Timon is Apemantus, who's only there to snark at him and his flatterers.

Timon's steward Flavius tells Timon he's deep in debt, and can't even sell his lands to recover. Timon sends servants to three of his closest friends, but one by one they shoot him down. Timon is heartbroken, but decides to throw them another feast. At the feast, Timon gives his former friends an elaborate "fuck you", serves them a "soup" which is really just warm water, and chases them all out of his house with stones.

Timon is exiled from Athens and goes to live in a cave outside its walls, where he spends most of his time wishing plagues and disaster onto the city. While digging for roots, he finds gold coins. Alcibiades, another exiled lord, runs into Timon and confides he's going to sack and ruin Athens. Timon encourages him to ravish the entire city, and gives him gold to fuel the campaign; Alcibiades is reluctant to be so vicious, but says he'll avenge both of them.

Timon's old friends hear that he's suddenly wealthy again, and go to him, hoping to enjoy his generosity, but they then met with disdain and vicious insults. Apemantus shows up as well, to deliver an "I told you so," and the two have a comical battle of wits before Timon chases him away with stones. The only person Timon doesn't hate, it seems, is his old servant Flavius, who visits him but doesn't ask for any money; Timon gives him the rest of his gold, and instructs him never to be generous to anyone.

Alcibiades attacks Athens, but the senators convince him not to attack. Alcibiades agrees, and receives word that Timon is dead. He reads the epitaph Timon had composed for himself, and muses on how great Timon was and how far he fell.

Not to be confused with that Timon.

Timon of Athens contains examples of: