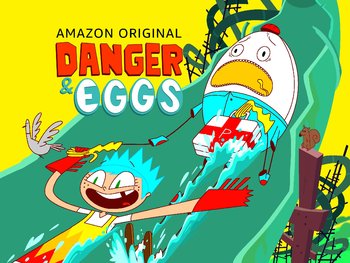 D.D. and Phillip. They do stuff.
Advertisement:

Danger & Eggs began as a Prime Video animated pilot that debuted in 2015 created by Shadi Petosky and Mike Owens. In 2017, the full series premiered with 13 episodes in its first season released through Amazon Prime exclusive streaming.

The show follows fearless young lass D.D. Danger, the latest in a long line of thrill-seeking daredevils and stuntmen, and her best friend Phillip, a cautious but inventive giant anthropomorphic egg. Phillip is the son of an enormous chicken that inhabits Chickenpaw Park, where he and D.D. spend their days getting into all manner of strange misadventures.

The show is notable for being the first animated series ever (co-)created by a trans person (trans woman Shadi Petosky) and featuring a significant amount of explicit and unambiguous LGBTQ representation in a family-friendly cartoon series with the primary demographic of kids ages 6-11.

Parodied in Danger & Eggs where the singer stumbles and tries to accurately explain what the show is about.

Parodied in Danger & Eggs where the singer stumbles and tries to accurately explain what the show is about.