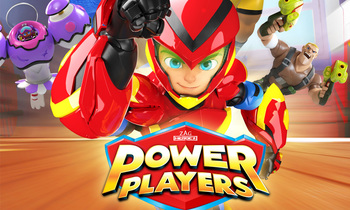 Power Players is a 2019 CGI-animated show produced by Zagtoon and Man of Action Studios.
Advertisement:

Nine-year-old boy Axel is staying with his uncle Andrew while his parents are off on a diplomatic trip. Learning from his uncle's neighbor's daughter Zoe that his uncle used to be a famous toymaker, Axel snoops around in his workshop and comes across a pair of mysterious gauntlets known as Power Bandz that attach themselves to his wrists and a mysterious locked box. A voice inside the box persuades him to open it, only for an evil toy known as Madcap to be unleashed. Also freed from the box are a team of toys known as the Power Players tasked with stopping Madcap before he can use Andrew's Minergy batteries to rule over all humans. Using the Power Bandz to transform into the toy-sized superhero Action Axel, Axel works together with the Power Players to stop Madcap and his evil schemes.

In the U.S., it airs on Cartoon Network, and airs on Teletoon in Canada. It premiered in the US on September 21, 2019.