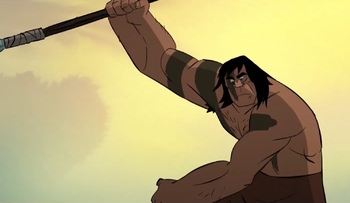 Voiced by: Aaron LaPlante
A prehistoric hunter who goes on a journey after losing his family.
Fang 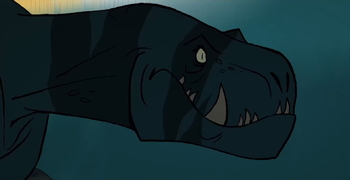 A female Tyrannosaur who befriends Spear after she also loses her family. 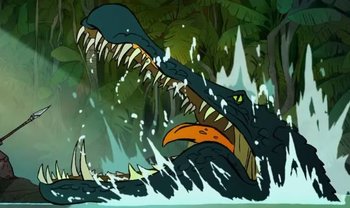 A large flying creature trying to take some fish from Spear.
Horned Tyrannosaurus

A pack of monstrous predators who kill both Spear's and Fang's families.
Horned Deer (Syndyoceras) 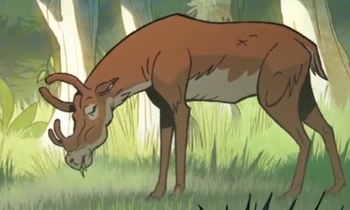 A herbivore Spear used to hunt. 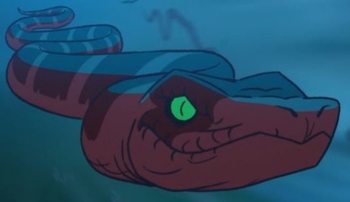 A colony of serpents living behind a waterfall.
Mammoths 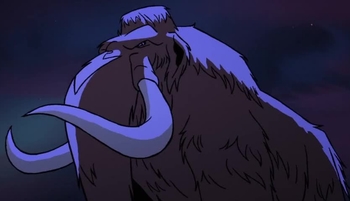 A herd of intelligent giant beasts migrating through a frozen wasteland.
Saber-toothed Wolves

A pack of scavengers feeding on dead mammoths.
Raptors

A pack of dinosaurs living on a savannah who attack Spear and Fang.
Primitive Men

Voiced by: Aaron LaPlante, Tom Kenny
A tribe of ape-like albinos hiding in caves from the bats.
Giant Bats

A flock of monstrous bats terrorizing the savannah during a blood moon.
Giant Spider

A monstrous spider living on top of a spire, apparently controlling the bats.
Ape Men

Voiced by: Aaron LaPlante, Jon Olson
A tribe of hominids who capture Spear and Fang and use them in a deadly martial tournament. They return in the season finale.
Wild Dogs 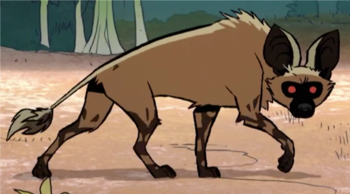 A pack of giggling scavengers that pursue Spear and a wounded Fang after their skirmish with the Ape Men.
Argentinosaurus

A herd of sauropods living peacefully in a valley, until one of them gets infected with a plague.
The Plague of Madness
A virus that drives its victims into a murderous rage and leaves them looking like the walking dead.
Infected Hadrosaur 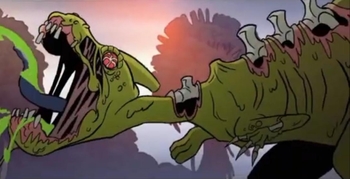 An Argentinosaurus infected with a zombie-like plague.
The Coven

A group of prehistoric women who perform dark magic who are lead by their supernatural matriarch.
The Night Feeder 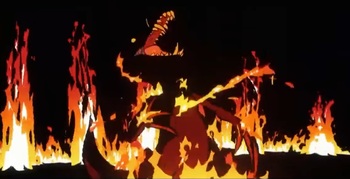 A mysterious, nocturnal predator that hunts in some dark woods that Spear and Fang travel through. Its speed and strength are unmatched, as is its sadism. 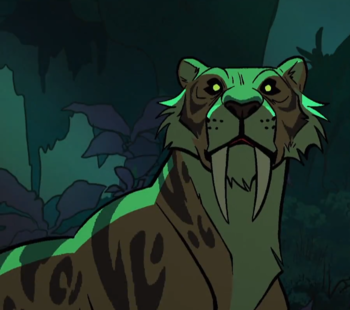 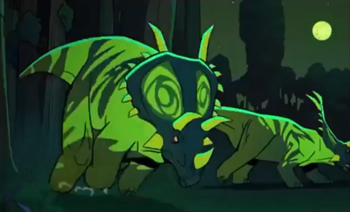 A herd of herbivores who become the Night Feeder's victims.
Small Theropod 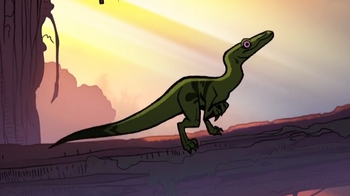 Voiced by: Laetitia Eido-Mollon
A Homo sapiens (modern human) woman whom Spear and Fang save from a pliosaur and later befriend.
Liopleurodon
A large marine reptile that attacks Mira.
Anzu
A large feathered dinosaur hunted by Fang, Spear and Mira.
The Scorpion
A mysterious warlord from across the sea, who originally took Mira and her kin as slaves.