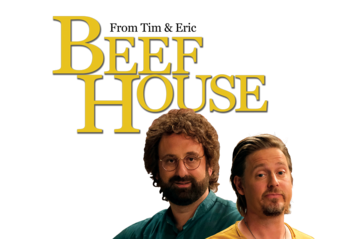 Beef House series created by Tim & Eric. It follows the lives of Eric, an unemployed suburban man, his wife Detective Megan (Played by Jamie-Lynn Sigler), and the "Beef Boys" Ron, Tennessee Luke, and Ben-Hur (Played by Ron Austar, Tennessee Winston Luke, and Ben-Hur, obviously.), and Eric's best friend Tim, all of whom live in the Beef House.
Advertisement:

Of course, despite being an Affectionate Parody of 80's and 90's family sitcoms, it wouldn't be Tim and Eric without their usual absurdity. The series airs on Adult Swim, and is Tim and Eric's fifth series for the network (after Tom Goes to the Mayor, Tim & Eric Awesome Show, Great Job!, Check It Out! with Dr. Steve Brule, and Tim & Eric's Bedtime Stories.).

Tropes associated with Beef House include: