Series / Portrait of a Marriage 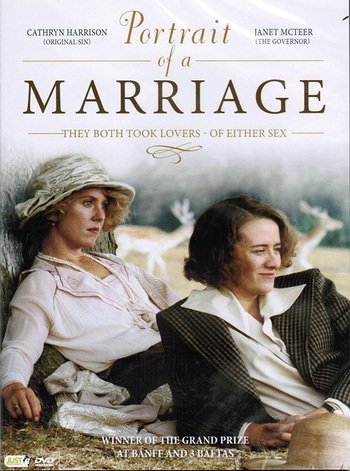 Portrait of a Marriage is a British television miniseries based on the book of the same name. That was, in turn, inspired by the real-life friendship and following lesbian love affair between noted writers Vita Sackville-West and Violet Keppel, plus the concurring strength of Vita's marriage to the homosexual diplomat Harold Nicolson). A BBC production, the miniseries features performers such as David Haig, Cathryn Harrison, Janet Mc Teer, and others.

In terms of setting, Portrait of a Marriage focuses on the bohemian, wealthy set during the 1910s and 1920s. Directed by Stephen Whittaker and produced by Colin Tucker, the miniseries first aired on BBC Two in four parts in 1990. An edited version (cut to three and a half hours from four) was later exported to the U.S., airing on PBS in 1992.

In terms of story-line, the miniseries follows real-life events. To recap those, Violet Keppel, a talented writer and the daughter of a socialite who happened to be King Edward VII's last mistress (though Tory politician Ernest William Beckett was thought to be Violet's biological father), was close friends with Vita Sackville-West since childhood. This friendship escalated into romance. However, Violet decided to marry a man named Denys Trefusis. Violet frankly labeled this decision to Vita as "just a business arrangement". In terms of her own life, Vita got married to diplomat Harold Nicholson in 1913 and later had two sons. While both undergo multiple homosexual affairs, they lived together in close devotion until her death in 1962, passing at the age of 70. Harold himself died in 1968.

The miniseries provides examples of: