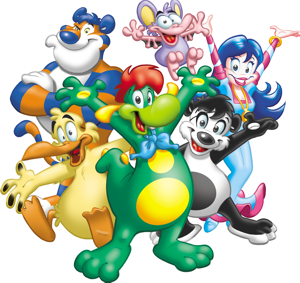 Clockwise from upper-left: Ti-Gey, Mousley, Princess Aurora, Bambù, Prezzemolo, Pagui
Prezzemolo is a 2002 Italian animated series based on the mascots of the amusement park Gardaland and consisting of 26 11-minute episodes that tell a continuous story. The main character is the eponymous dragon Prezzemolo (Italian for “parsley”) who gains temporary superpowers by eating strawberry pizza. Along with wisecracking bat Mousley, Love Interest Princess Aurora, local Gadgeteer Genius Bambù the panda, ditzy seagull Pagui, and the two-faced tiger Ti-Gey, he travels across the galaxy in a device called the Globosphere, looking for the four magical elements needed to defeat the evil witch Zenda, who is trying to become immortal.

It’s better than it sounds.