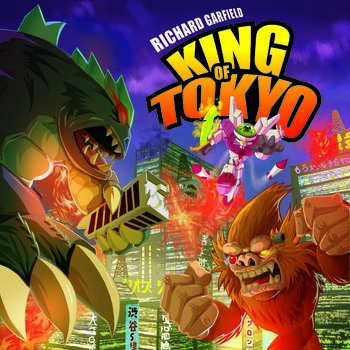 Let's get ready to RUMBLEEEE!!!!
Advertisement:

King of Tokyo is a 2012 competitive Adventure Board Game by Richard Garfield. You are a giant monster rampaging through Tokyo, and so are up to five friends. Rolling dice to determine the majority of your actions, the game is best described as a sort of bizarre lovechild of Yahtzee and Pokémon, soaked in a huge vat of kaiju tropes.

On each turn, you roll six dice a maximum of three times. (Like Yahtzee, you may keep rolls that you liked and reroll the remaining dice.) From these rolls you can gain points, deal damage to other monsters, heal damage inflicted by your opponents, or gather energy—the game's currency for buying special cards that make your monster more of a threat. Energy can also be spent for a few other gameplay actions. There is also the element of Tokyo—the game's board and special location. At most given times, a monster is occupying Tokyo—a risky position that can be very rewarding. You cannot heal while in Tokyo, and other players' attacks are automatically directed at you, but you gain points every turn you occupy Tokyo, and deal damage, when you attack, to everyone but you. When you choose to leave Tokyo (and you will want to, in order to heal) the last person to attack you has the option to occupy it in your stead.

The game is won in one of two ways: You either win 20 points, or are the last monster standing.

An expansion to King of Tokyo, Power Up!, was released in summer 2013. It adds one new monster to the available options, Pandakai, and introduces evolution cards—monster-specific abilities unlocked with certain dice rolls that serve to make you even more ludicrously powerful. The advantages offered by the evolution cards show the start of tailoring certain monsters more towards certain strategies, rather than making the monster choices arbitrary a la the vanilla game.

A half-sequel, half-expansion set in New York, titled, appropriately, King of New York was also released, along with its own Power Up! expansion. In addition to six new monsters, it was mechanically quite different, introducing districts to allow monsters to move about the city, buildings and military units as actual pieces to be placed and destroyed and the far more proactive U.S. military actively fighting back against the marauding monsters. The core idea still remains, and the monsters from the new game can be used with minimal fuss in the old game. Provided you buy the expansion, at least.