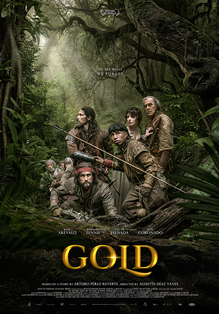 In early 16th century, for many Spaniards whom poverty and hunger had driven into becoming soldiers, the just discovered Indias offered dreams of fame and fortune. So there they traveled in great numbers, with everything to win and nothing to lose except life.
They were tough, arrogant, cruel people, often divided by quarrels and birthplaces. They killed without any scruple and died without any protest in the search of the dreamed gold. But while they walked into the unknown, these men and women gave birth, unwittingly, to a new world and an amazing epic.

Gold (Oro) is a 2017 Spanish Historical Fiction film directed by Agustín Díaz Yanes. Based on and expanded upon a short story by Arturo Pérez-Reverte, it tells the journey of a 16th century Spanish expedition marching through the Mesoamerican jungle in an ill-fated attempt to find the legendary gold city of Tezutlan.

The film is not based in any historical fact, although it takes inspiration from the expeditions of Hernán Cortés, Lope de Aguirre and Vasco Núñez de Balboa.