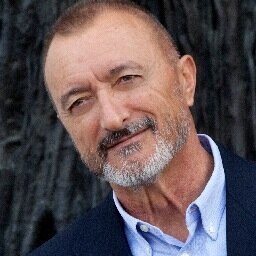 The Man from R.A.E.
Arturo Pérez-Reverte (born November 25, 1951) is a Spanish journalist, writer and member of the Real Academia de la Lengua, the main government body of Spanish Language.
Advertisement:

Although he used to be more known for his work as a novelist, Reverte's career would fit a literary character itself. He first became a journalist for newspaper Pueblo before joining Spain's public broadcast network Televisión Española (TVE for short), where he worked for many years both as a host for a handful of shows and as a war correspondent for multiple military conflicts. He covered nearly a dozen of those, having the dubious chance to see in person some of the nastiest things from The '80s's political environment, and was particularly involved in the Eritrean War of Independence and The Yugoslav Wars. His nine-year tenure for TVE was cut short in 1994, when he left after bizarre accusations that one of his novels was slandering the Government of Spain. He became a full time writer afterwards.

Reverte is considered one of the greatest modern Spanish writers, having published 22 books and helped to attract people to the history of the country through his Historical Fiction novels, usually filled with polished pages of both swashbuckling action and cynical life philosophy. His Alatriste saga was his breakout and remains his most known work, although he has several other famous novels which have been often adapted to film and TV (albeit not always to his delight). All of this granted him membership of the Real Academia in 2003, a job that he has occupied since and combined with a memetic career as a Twitter animal. Reverte is both famous and infamous there for his bitter wit, disdain for political correction and penchant to engage in verbal brawls with just anybody.

He is also a famous fan of Baccano!