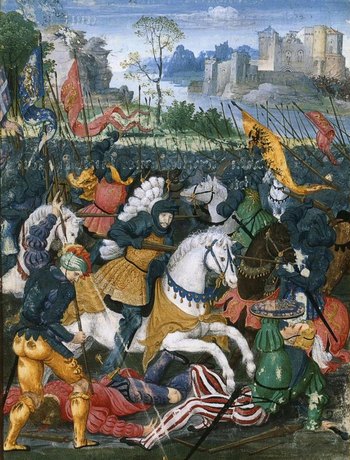 King of France François I at the battle of Marignano, 13 September 1515.

The Italian Wars were a series of conflicts, lasting from 1494 to 1559 (with a few peacetime gaps in between) that involved the Italian city-states, The Papal States, and most of the major Western European states (including France, Spain, the Holy Roman Empire, England, and Scotland), and even the Ottoman Empire.

All fought over, as the name would suggest, the Italian peninsula. Originally fought over dynastic conflicts in the Duchy of Milan and the Kingdom of Naples, the wars quickly became an attempt for all sides involved to increase power and territory, and gave way to many alliances and betrayals. They ended for good with the peace treaties of Cateau-Cambrésis on April 3, 1559.

These conflicts also had the effect of increasing the exportations of discoveries and artistic styles of The Renaissance outside of the Italian peninsula, in France with King François I most famously.